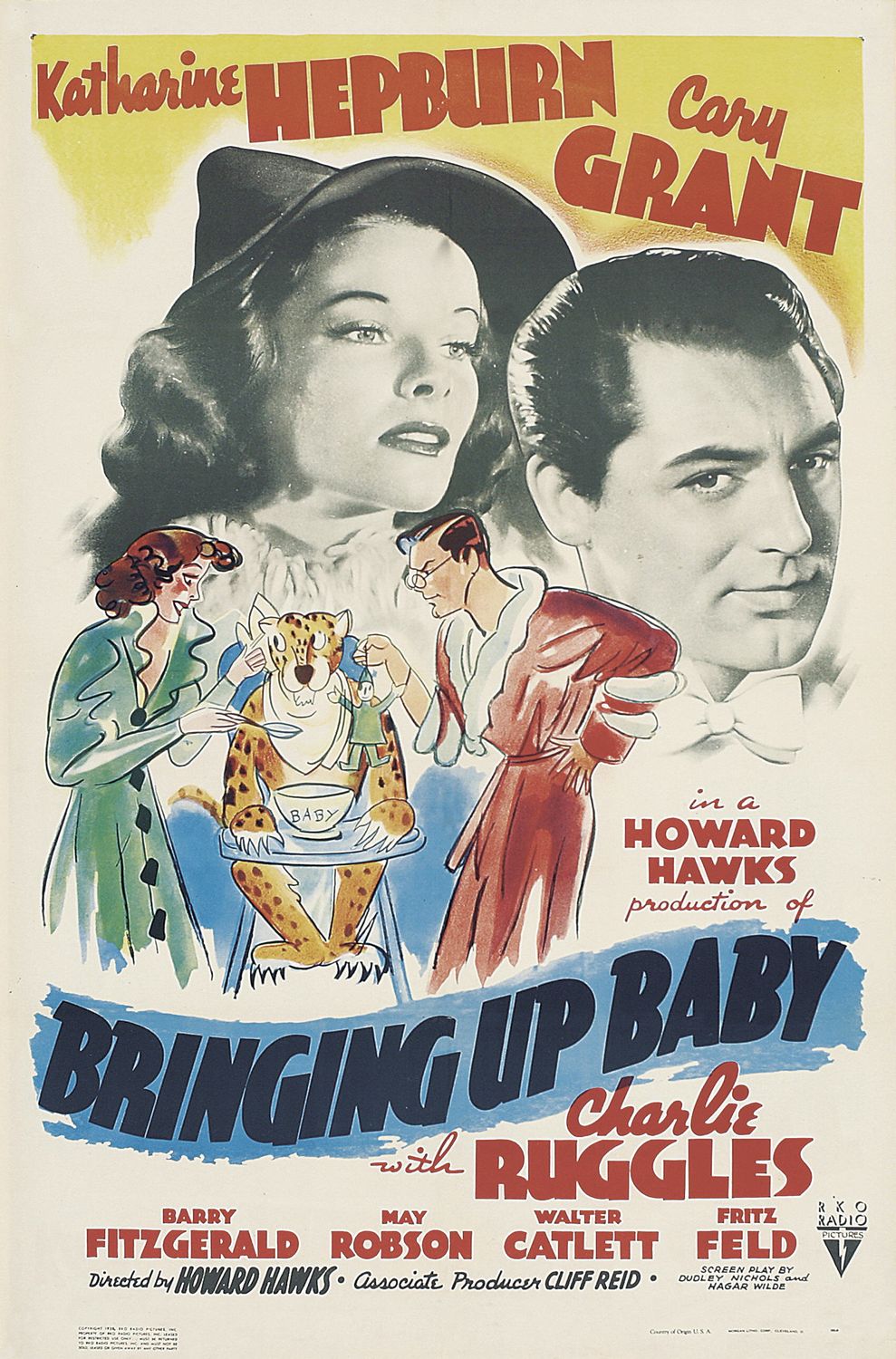 David Huxley: Now it isn’t that I don’t like you, Susan, because, after all, in moments of quiet, I’m strangely drawn toward you, but – well, there haven’t been any quiet moments.

R: Very few of the films we’ve seen on the list so far have passed the Bechdel Test, so well done to this classic from 1938 for putting the more recent entries to shame.

F: I always thought the two female characters in the Bechdel Test had to not be related (which I think would mean this film fails) but I’m probably adding more conditions than are necessary. It’s also nice to see Katherine Hepburn credited over Cary Grant in the opening of this. She does have more lines and was the star of the time so makes sense!

R: Regardless of star power, Katherine Hepburn definitely deserves top billing simply because it’s her character that’s the real driving force behind the events of the film. She is a whirlwind while Cary Grant as David has absolutely no control over what’s happening. Did you enjoy their repartee?

F: Later on I did but at the beginning I was very frustrated by her character. There were times when I almost shouted at the screen when she wouldn’t let him speak, where if she just listened the situation would be resolved straight away. It actually made me quite anxious at times!

R: It took me a little while to warm to the film. It’s very obviously set up as a screwball comedy so of course you have to let yourself go along with the ride, but at times the level of ridiculousness is maybe pushed too far. Although thinking about your frustration with Susan at the start, isn’t this one of the things that the film does really well? Throughout the movie we see Susan the same way David does, developing from an irritating nuisance at the start, to a charming one-of-a-kind by the end.

F: If I was David I wouldn’t have hung around as long as he did. I did warm to her later on though. But let’s be honest, the real star of this film is Baby the leopard!

R: You’re always going to be a bit biased towards any film featuring a cat, aren’t you?

F: It’s true I am a huge fan of cats. But the way they did the scenes with the leopard was very clever. At no point did I see any special effects or split screen even though they did use those techniques.

R: Absolutely and I suspect it’s one of the reasons this has made it onto the list. While I think we’d both agree some of the comedy feels a little dated now, the special effects hold up really well – and that’s not something you might typically expect to say about a 1930s film. Of course not all the shots with the leopard were done using effects and it was interesting to read in the production notes afterwards that Cary Grant was terrified of the leopard while Katherine Hepburn really warmed to it. You definitely pick up on Cary Grant’s genuine unease in some shots!

F: Yeah it definitely added to the different dynamics each of the characters had with the leopard. I do think the main problem with this film, you mention it above, is the comedy is dated. I’ve seen the jokes done before and better – for me the episodes of Frasier that use farce are the best example and I think it’s because even though the situations are absurd, the characters aren’t. I didn’t really feel that here.

R: I agree, although of course you could argue that Frasier might never have been made without the groundwork laid by this film. And you can’t really ignore the historical context with a movie like this, can you? Gender politics – as well as censorship laws – have moved on, so of course it can’t resonate now like it did in 1938. Does that mean today it’s more interesting as a museum piece than as entertainment?

F: Maybe but I also want my movies to be entertaining even if they are culturally important. And this movie was a flop when it came out and it only came to be considered a classic years later. So the audience then didn’t take to it. The audience now thinks it’s dated. I’m not really sure who thinks it’s a classic unless, like you say, it’s a museum piece.

R: The great and the good of the AFI think it’s a classic! And although we’ve both said some of the humour is dated, I did properly laugh out loud a few times. With the lightning fast plotting, Susan’s unique character, the leopard, and a good number of decent jokes, I don’t think it’s hard to see why it holds a place in people’s hearts. It’s cute.

F: I actually thought Swing Time was funnier! But the leopard is cute, I’ll give you that.

R: It’s another one where I can see why it’s on the list, but it didn’t quite do enough to win me over. Sorry Baby, it’s a no from me.

F: It made me too anxious and I didn’t find it that funny. It’s a no from me too.