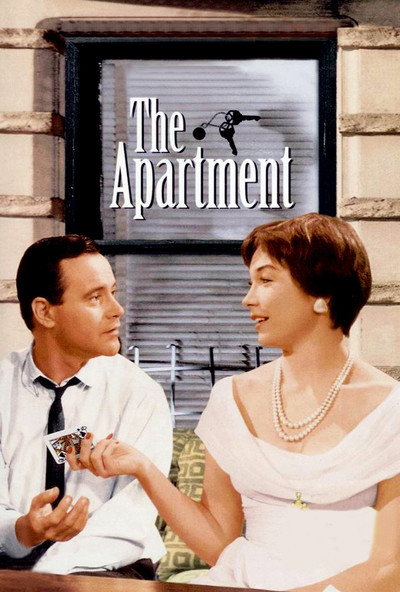 Baxter: I’m gonna take Miss Kubelik off your hands. The plain fact is, I-I love her. I haven’t told her yet, I thought you should be the first to know.

F: Well not only does this film include a character called Fran, it features actuaries – albeit only in passing – which is my profession. So I’m almost certainly wired to like this. Do you reckon when a film includes elements like this, which relate to your own life, you are more forgiving of any flaws?

R: I don’t know, that kind of thing can go both ways. Sometimes when you’re familiar with a film’s subject matter it can be very irritating when the details aren’t spot on. Though I’m probably more grateful than you are that this doesn’t dive too deeply into the technicalities of life insurance calculations!

F: There are a couple of stats comments such as the average number of colds per adult per year (answer: 2 and a half!) but yes, his job is a minor detail.

R: The fact Baxter works in insurance specifically is a minor detail, but there are few films where a typically mundane workplace is so central to the plot. Coming to this nearly 60 years after it was made there’s real joy to be had just in the minor details of the setting and seeing how much the world of work has changed. Largely for the better I’d say!

F: So is this a film about work-life balance? Baxter’s character definitely  shows the benefit of separating the two! I was really able to sympathise with his character. I do think that is in no small part to Jack Lemmon – I’m quite a big fan of his work (from what I’ve seen) and this  is one of his top performances.

R: The film really resonated with me, and that has a lot to do with Lemmon, as well as probably the fact I’ve had my share of thankless office jobs. The film’s message that you can’t let work – or anyone at work – define who you are, could very easily seem a bit twee. But thanks to his performance – those little facial cues and his timing – the movie is hugely effective as both a comedy and a drama. Although credit really has to go to Shirley MacLaine for that too…

F: Yes she is great in this, managing both the comedic parts and the more serious scenes. For a comedy there are some fairly tough themes in this – suicide, loneliness, adultery – but I like the way the film balances this.

R: The bittersweet tone is there from start to finish, and is superbly nuanced so you never notice a change of gears. But comedy often does need a bit of a mean streak to be effective, doesn’t it? The casual sexism the women in the film have to put up with is part of that, although I wonder if in 1960, audiences would have considered an executive giving an ‘elevator girl’ a slap on the backside fairly unremarkable?

F: Yes, maybe that’s another reason I wasn’t so taken with Bringing Up Baby since there was no let up from the wackiness. Regarding attitude to women in the office, I think it was fairly widespread (at least that’s what Mad Men told me!) so I can imagine 1960s audiences finding it funny, not inappropriate. I was more shocked by the doctor slapping the patient round the face!

R: Yes I instantly thought of the scene in Airplane where the passengers line up to “help” a lady suffering a panic attack. Medical practice, and attitudes to women, have thankfully moved on in the past half decade! This is an amazing time capsule though. Thanks to the ordinary setting everything that’s changed really jumps out at you.

F: Same with what hasn’t changed! There are still plenty of people in the workplace who do get bossed around and people still play cards as a way of passing the time (though maybe not so much gin rummy!) I do think that the screenplay of this film deserves a lot of plaudits. Its very witty and clever and stands up with the best of Billy Wilder’s work.

R: The script is smarter than an office full of actuaries, and although we’ve both only seen the film this one time, it’s clear that it’s packed densely enough that there’d still be plenty more we could get from a second or third viewing. That’s the sign of a comedy that’s a bit special, isn’t it? That you still have an appetite to see it again even though you already know all the jokes?

F: Yes I would expect to get more out of it on a second viewing and like you say, this can be rare for comedies.

F: I really enjoyed this. It’s a yes from me.