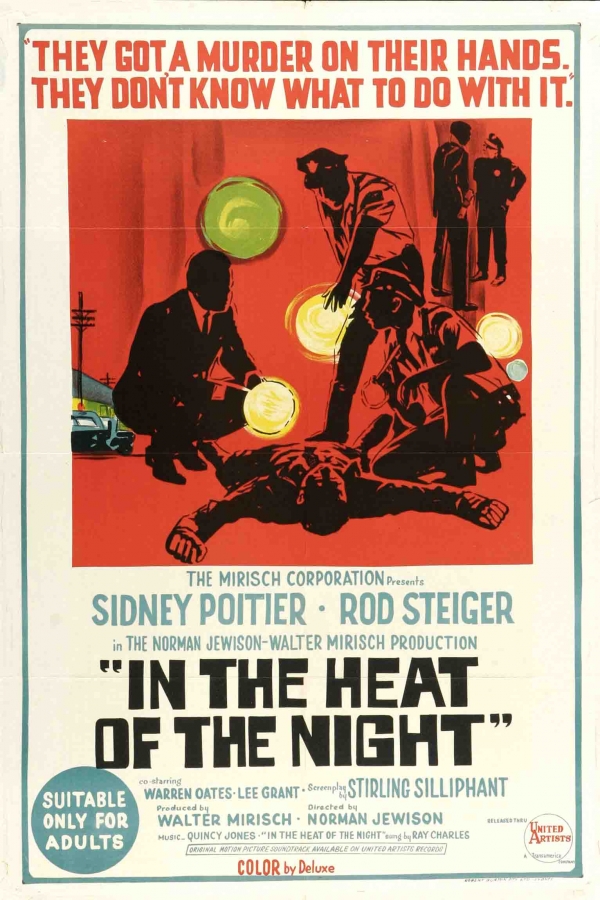 Chief Gillespie: I got the motive which is money and the body which is dead.

R: Yes, within the past year, at a cinema.

F: Same. Now is also probably the time to admit that I fell asleep and missed the last 10 minutes first time around…

R: The downside of going to a cinema that serves alcohol!

R: You’d certainly have plenty to get your teeth into if you wanted to use the AFI 100 list to reflect on 20th century race relations in the U.S. This to me feels like a hipper, funnier sort-of-sequel to To Kill A Mockingbird (which we’ll get to at 25 on the list). That takes place in the 1930s, this is mid-60s, and of course we had Do The Right Thing, which is set in the late 80s. Of those three, this might well be my favourite.

F: Absolutely. For me Do The Right Thing just pips this but only because I think the story is more original – this is on one level your typical whodunnit murder mystery but has many layers.

R: I’d say the murder mystery is the frame on which the more interesting plot elements are hung. The relationship between out-of-towner Virgil Tibbs and police chief Bill Gillespie is what really gives the film its snap, crackle and pop. The first time we saw this I thought Virgil was the main character, and in terms of time on screen that’s probably right. But watching it this second time, it was clear that Bill is the one who goes through the most internal conflict, more obviously changes as a result of the events of the film, and probably has most influence on what happens. I wonder if that’s because in ’67 a majority of the audience would be white, and a lot of them would be going on a similar journey to the chief?

F: Yes that is likely. The film was made in the midst of the Civil Rights Movement and so the issues were prominent in people’s minds. And I also agree about the characters – although most of the events in this film happen to Virgil, Gillespie’s character does seem the most developed to me. And whilst all the performances are great, Rod Steiger does stand out.

R: Would you put Rod Steiger’s performance ahead of Sidney Poitier’s? They’re difficult to compare because they are such contrasting characters, but while Steiger probably has the easier (certainly louder!) material to work with, I think you’ve got to give credit to Poitier’s much more understated performance. He manages to convey some level of despair or contempt bubbling beneath the surface in every look and glance. It’s not easy to play a role that’s a bit aloof like that and still be likeable, but he does it superbly.

F: I’d definitely put Steiger above Poitier in this. It’s such a raw, honest performance. I’d go as far as to say it’s one of the best performances so far – perhaps even the best male performance (I still think Meryl Streep in Sophie’s Choice and Cloris Leachman in The Last Picture Show are the best so far). But don’t get me wrong, I do think Sidney Poitier excels here too! Did you realise there were two sequels to this film??

R: I did not realise that! The internet tells me the sequels were not so critically acclaimed, and I can imagine why. This story is perfectly self-contained, and without a highly contrived way of reuniting Tibbs & Gillespie, it would be near impossible to recreate the magic of that central pairing.

F: Yes Gillespie isn’t in the sequels so I can imagine the magic of the central pairing had gone. What about things you didn’t like? I do think the final reveal of the killer is a little naff…

R: The bit you couldn’t stay awake for the first time we watched this? Yes, it is a bit unsatisfying. Without wanting to spoil it, the bait-and-switch to a relatively obscure culprit is almost like something out of Scooby Doo. But I don’t think it is a spoiler to say that, because by the end of the first act the murder mystery is secondary to the racial tensions and development of the relationship between Tibbs and Gillespie. And we see that when we get to the ‘proper’ ending, after the culprit is revealed, which is really well done.

F: Just have to keep bringing up me not making it to the end last time don’t you! But I agree with what you say above that the plot is just a way of getting the characters to interact and it’s these relationships that are more important to the film.

R: It’s up there with the very best character pairings, isn’t it?

R: Loved it even more this second time around. It’s a yes from me.