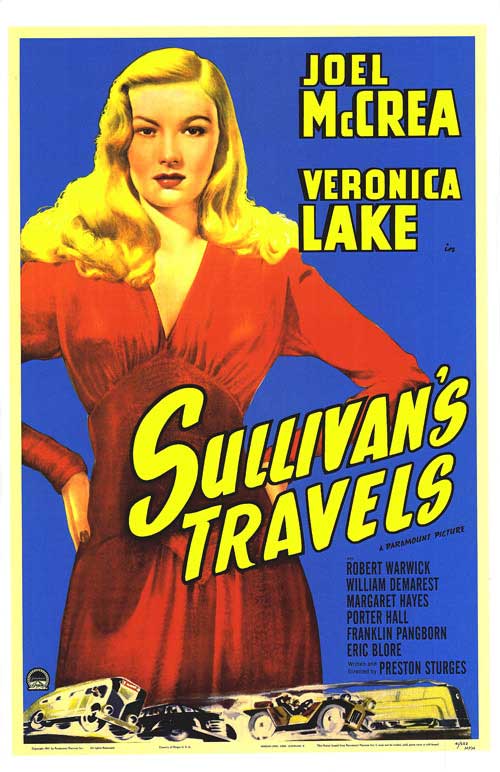 Policeman at Beverly Hills station: How does the girl fit into the picture?

John L. Sullivan: There’s always a girl in the picture. What’s the matter, don’t you go to the movies?

R: This is the story of a Hollywood director who sets out to discover what it’s like to be homeless, and to experience genuine misery, as research for his next film. This is not Hollywood’s take on Down and Out in Paris and London though! The tone is very whimsical and it felt like a fairly perfect film for a lazy Sunday afternoon, didn’t you think?

F: Pretty much made for Sundays this film! A fairly straightforward plot, plenty of good humour and parts to make you think as well. Have to say that I had to Google the Orwell book you mention though!

R: Shame on you! It is one of his best. But what was it in this film that made you think?

F: The idea that Sullivan, born with a silver spoon in his mouth, believes he knows what the less fortunate want from a movie and way that he learns over the course of the film what movie-goers actually want (escapism). And the idea that someone feels they can understand what it’s like to experience misery and trouble in just a couple of weeks. He can get money, a car, a doctor whenever he needs it.

R: Yeah, I couldn’t stop thinking of the line from Pulp’s Common People “that if you called your Dad he could stop it all”. And I wonder if in a modern remake Sully might initially turn to virtual reality to get the experience of being homeless?

F: Perhaps, although virtual reality wouldn’t beat him up. Or give him a cold (the lack of him covering his nose when he sneezes was an issue for me!!)

R: Ha! It struck me that we get a lot of definitions of poverty over the course of the film but ultimately it’s only when Sullivan feels his situation is totally hopeless that he gets the breakthrough he was looking for. At that point do you think he’s earnt it?

F: I think the montage where he ends up squeezing into a space on the floor to sleep is perhaps the moment where he gets it and also where the audience doesn’t just see it as an act anymore. What role do you think The Girl plays in this? Is she just there because there’s always a girl in the movies, as our quote at the top says?

R: She’s certainly more than just eye candy; there’s a real spark to her dialogue with Sullivan. Having said that, she does seemingly cease to exist whenever he’s not on screen. And the fact she isn’t named is sadly also a bit of a reflection of the strength of her character.

F: I feel that the story of the film would be absolutely no different if she wasn’t in it. And there’s the moment where they are getting on the train and there’s a comment about her wearing boys clothes and has tied her hair up under a hat but then there’s no mention of that again. It’s a shame but I don’t think she really serves any purpose…

R: She does help resolve the sub-plot with Sullivan’s ex-wife, but you’re right she’s pretty incidental. But is that a really a problem? This is Sullivan’s Travels, not The Girl’s Travels, after all…

F: I guess not. But it did feel an issue for me. I feel I’m a bit negative on this but there are things I really enjoyed. I liked the subtle humour and the main performance was excellent.

R: The comedy holds up really well for a film that’s nearly 80 years old. There might have only been a couple of moments that made me properly laugh out loud but I was smiling throughout. I particularly enjoyed the performances of Sullivan’s house staff.

F: I just wish audiences today still laughed as hard as the characters in this film do at Disney!!

R: It’s hard to believe anyone could ever find a Pluto cartoon so totally hysterical, but perhaps if that were your only form of entertainment and relief from hard labour you’d make the most of it. It’s probably also important to remember that this came out during the second World War, isn’t it?

F: Yes, at a time when movies were a real form of escapism from reality, it probably resonated well with audiences.

R: This is genuinely a film anyone can enjoy. For that reason it’s a yes from me.

F: I’m not sure this bowled me over and I do have an issue with The Girl character. So on that basis I’m going to say no.