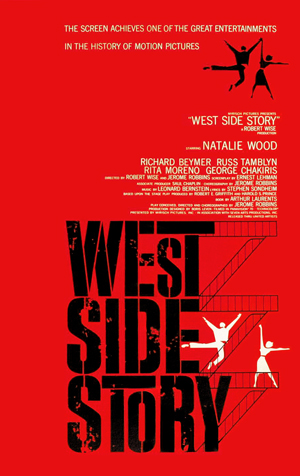 Riff: Look, Tony, I’ve never asked the time of day from a clock but I’m asking you, come to the dance tonight. I already told the gang you’d be there. If you don’t show I’ll be marked lousy.

R: Is it okay if we just carry on talking about Taxi Driver? This didn’t really do it for me at all.

F: Sorry you’ve got to take the rough with the smooth! I enjoy musicals but this did feel too musical theatre for me. I enjoyed the big dance numbers and the songs, but I couldn’t deal with the dancing, rather than just walking, down the street in the opening and the annoying clicking of fingers.

R: It’s the pacing that I struggled with the most. It is so slow to get going. And the gangs are just so embarrassingly tame – at least at the start. I suppose it might have suffered there from following on from last week’s much grittier film based in New York?

F: It does get grittier as it goes on though. I’m thinking of the scene when Anita goes to the drug store to pass a message to Tony and runs into the rest of the Jets. There’s a real sense of threat there, but we do have to wait a while for it. It’s frustrating because there are a lot of issues here, including gang violence and racial tensions, which I do feel could make a really great story.

R: I agree it comes to life a bit in the final act, but by then it was too late for me. The tone is just too over the place. So much that comes in the first couple of acts is twee and unbelievable that it doesn’t feel like a credible vehicle for dealing with the serious stuff that comes at the end. And most damningly for me, the central romance feels totally lame and contrived. I laughed at them, not with them.

F: The character of Tony is so wet. I can’t imagine for a second he was the founder of a street gang. It doesn’t help that I don’t think the actor, Richard Beymer, is particularly great in this – it’s not even him singing so makes me think how come he got the job? Elvis was in the running at one point and I would have definitely preferred to see him in the role.

R: Ha! I didn’t realise Beymer wasn’t the one singing. You’re right that makes it a totally baffling bit of casting.

F: Another problem I have with the love sorry is that it’s supposed to be Romeo and Juliet right? But how come in the end [SPOILER] ‘Juliet’ doesn’t die? Seems like a cop out to me.

R: What you call a cop out I didn’t have too much of a problem with. In a way it’s more tragic to keep one of them alive than for them both to die. [END SPOILER] And we shouldn’t make this sound like a complete car crash of a film. It has a few redeeming features, doesn’t it?

F: As I said at the beginning, I did enjoy the big dance numbers, especially the scene in the dance hall. And in general the dancing is very good. I like the characters of Riff and Anita too. I guess the fact that the supporting characters are more interesting than the main characters is an issue. Oh and I like being able to sing along to the songs too! So a few thing for me. What about you?

R: While some of the songs are way too schmaltzy for me, there are some that are bona fide classics, and for good reason. America is a tune, no doubt about it. And the context is important to remember. 1961 was in many ways a less tolerant time than now.

F: Yes of course, and the musical itself was written a few years before that. I actually think that overall my main issue with this film is that it feels very staged. I imagine this is actually really good in the theatre but I don’t think it translates that well to film. Comparing with say Cabaret, or even more recent adaptations of film musicals like Tim Burton’s Sweeney Todd or Tom Hooper’s Les Mis, this doesn’t work as well for me.

R: I certainly appreciate Cabaret more after seeing this. Where I think this really falls short is in the strength of its characters. I just didn’t care about them, and ultimately the songs aren’t good enough to compensate.

F: It’s a shame but I do agree with you here.